St. Michael of All Angels 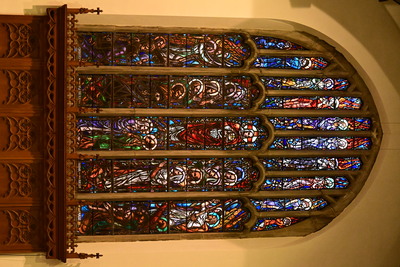 Inscription: IN MEMORY OF / REV CANOR WJ BRAIN MA / FOUDNER AND FIRST RECTOR / OF THE PARIS 1907-1931. Acts 1:10-11; Shows the Ascension of Christ. The Adjacent windows show the disciples and angels as onlookers. Only window with fillet line (border), which is a double line of about 2” in width. Williams notes that the work shows the strong influence of her time with Charles Connick Studios, Boston. Specifically, “The influence shows in the conventions of tracing lines in hair, hands and drapery.” Suggests that continues in The Annunciation and The Resurrection windows. It contains images in lancets 1 and 5 of families and working people of the 1950s. Earlier century saints include St. Joan (left) and St. Francis (right). St. John stands with the Virgin Mary. Shapes Christ and halo in shape of vesica (shape of a fish) or a secret ymbol among early Christians. The rainbow curve represents Earth and Christ’s incarnate life. In church records, Williams notes that this window is different from others in the church owing to the influence Charles Connick Studios. She had a graduate student work with her and he sued brushwork similar to the Connick Studios. This is particularly apparent in the this window and the Cathedral in Timmins and at Loretto Abbey School. Williams indicates that she designed the window, made the cartoon, and colouring choices while Ethel M. Scott painted the glass. Location: Apse Wall (east) or Chancel