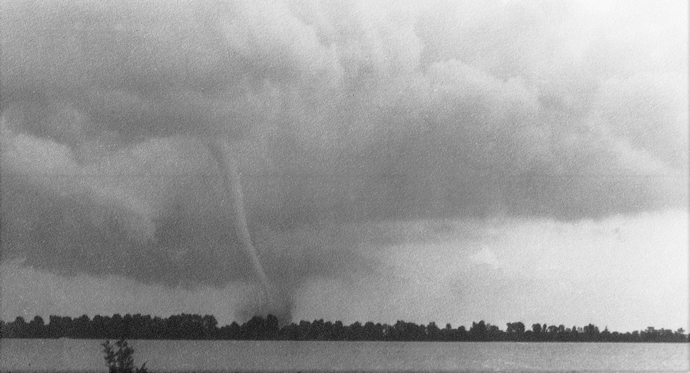 The Michael Newark Digital Tornado Archive is a collection of materials related to tornado and other damaging wind events that will eventually date back to Canada’s first verified tornado in 1792. Much of the materials consist of digitized versions of the original physical files housed at the Meteorological Service of Canada library in Toronto.

A couple of examples are provided below - there is much more to come!

Michael Newark, a University of Toronto graduate, worked as a meteorologist with Environment Canada from 1959 until he retired in 1991. It was while working as a weather forecaster at the Ontario Weather Centre in Toronto that he became interested in the study of tornadoes. While giving a weather commentary on CBC radio in 1974, he was asked questions about the high-impact tornado that struck Windsor on April 3rd of that year, and about Canadian tornado characteristics in general such as their frequency, intensity, the damage they have caused, and other properties. Not having a ready response, he promised to provide the answers - expecting to find them in published works. To his surprise, very little was known about tornadoes in Canada. It took him the next decade to research the topic, often on his own time. The final result was a large database of archival material dating back to 1792. Along the way, helped by volunteers, he conducted many field surveys of tornado damage, authored a number of published academic papers and magazine articles, and gave conference presentations and TV and newspaper interviews. This pioneering work on tornadoes in Canada was recognized in 2019 when he was made an Honorary Fellow of the Canadian Meteorological and Oceanographic Society. We celebrate the work of Michael Newark by naming this online digital tornado archive after him.