In the Beginning or Bartram Memorial Window 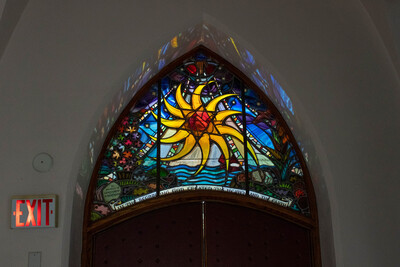 Inscription: IN MEMORY GORDON W.H. BARTRAM. IN THE BEGINNING GOD CREATED HEAVEN AND THE EARTH.

In discussing the window with the church historian at St. John’s in 1977, Wallis notes: “The concept of the window is based on the text ‘In the beginning God created the Heaven and Earth.’ To capture the mystery of the event I have chosen to represent a stylized Heaven and Earth with a unique and mystifying Sun as the focal point. The golden Sun, symbolic of Christ and Divinity, has at its centre a six-pointed star, that star of creation, symbolizing the divine power, majesty, wisdom, love, mercy and justice. The Hand of the Creator is shown at the top of the window. In the Heavens are twelve stars that, in the Christian symbolism, refer to the Twelve Apostles, and in their more extended meaning represent the entire Church. The rays of light descending from the moon and spreading out across the water suggest the transition from darkness to light.” (Christopher Wallis, The Evangel (St. John the Evangelist), April 24, 1977).