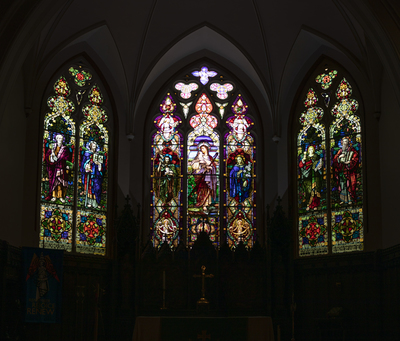 “Our late Rector the Very Reverend Michael Boomer, Dean of Huron, who entered into rest A.D. 1888”

Donated by the Ladies’ Aid

Jesus as the Good Shepherd is a well-known theme in church iconography. Jesus is clothed in regal purple, gold, and red clothes. He holds a lamb and a shepherd's staff. “The lamb has a branch of a thorn bush caught in the fleece of its flank to further show a lost sheep being found. Directly below the Christ figure is a gold eagle, symbol of St. John the Evangelist, in a quatrefoil motif. Directly above Christ is a blue panel, with the dove of the Holy Ghost. The Greek symbols of Alpha and Omega, symbolizing the beginning and the end, flank the dove on either side.”

Michael Boomer was born in Hill Hall, Lisburn, Ireland, on January 1st, 1810. He was educated at Trinity College in Dublin, earning his B.A. in 1834. After migrating to Canada, he became ordained in 1840, and was sent by Bishop John Strachan of the old Diocese of Toronto to a mission in Galt, where he served for 32 years.

At the age of 62, he became the Principal of Huron College, where he served from 1872 to 1885. While there he served the congregation in the Chapel of St. John the Evangelist, where it had its first home, and again when it moved to the chapel of the new Chapter House of the planned Cathedral of the Holy Trinity of November 2, 1873. In 1877, Boomer presided over the organizational meeting of the University of Western Ontario at Christ Church and the following year, with the rant of the Charter, became in effect the first President of the University until 1885, when ill health forced him to retire from both Western and Huron College. He died in 1888.