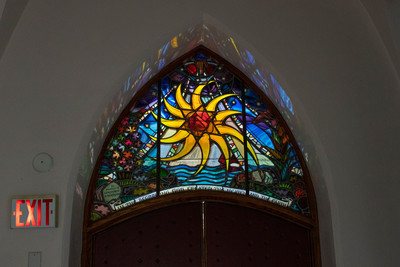 The window was inspired by the text: “In the beginning God created the Heaven and the Earth.” To capture the mystery of the event, Wallis chose to represent a stylized Heaven and Earth with a unique and mystifying Sun as the focal point. The golden Sun, a symbol of Christ and Divinity, has at its centre a six-pointed star, the star of creation, symbolizing divine power, majesty, wisdom, love, mercy, and justice. The Hand of the Creator is shown at the top of the window. In the Heavens are the twelve stars for the Twelve Apostles and by extension all of the church. The rays of light descending from the moon and spreading out across the water suggest the transition from darkness to light.

In celebration of the church’s seventy-fifth anniversary in 1963, the Board of Management authorized the publication of a history of the parish and Gordon Bartram, who spent a lifetime of service to the parish, was given the task. In addition to his tireless research, Bartram served on the Organizations Committee (1945) and on the Building Plans Committee (1954), which created the Cloister, the Baptistery, the Church Offices, and Sunday School Classrooms. He also served as People’s Warden (1955-56); Rector’s Warder (1956-57); and Lay Delegate to the Synod of the Diocese of Huron (1965 –73). His historical interests made him a leading figure in the London and Middlesex Historical Society, and the London Region Branch of the Architectural Conservancy of Ontario.