John and Peter at the Sepulchre 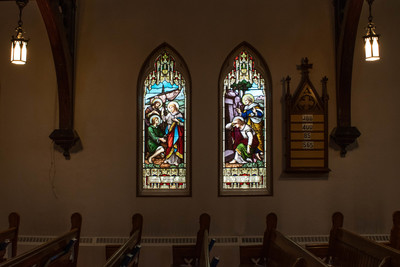 Dedication: “To the Glory of God and in loving memory of Alfred Beverly Cox, died May 11, 1904. Erected by the Members of the Bible Class and Club.”

In the left window, Christ calls James and John to leave their nets and follow him (Mark 1: 19-20). In the right window John and Peter enter the empty tomb on the morning of the Resurrection (John 20: 3-10).

Alfred Cox taught at the St. John’s Bible Class that eventually evolved into the St. John’s Athletic Club. For the church, he served as its Vestry Clerk for ten years and frequently was the organist. Cox was eventually elected as a member of the Ontario Hockey Association and was President of the YMCA.

John and Peter at the Sepulcher is part of a diptych along the south wall. The other image, The Calling of James and John, relates to the evangelization activities of the four saints.