Inspiring Minds seeks to broaden awareness and impact of graduate student research, while enhancing transferable skills. Students were challenged to describe their research, scholarship or creative activity in 150 or fewer words to share with our community. 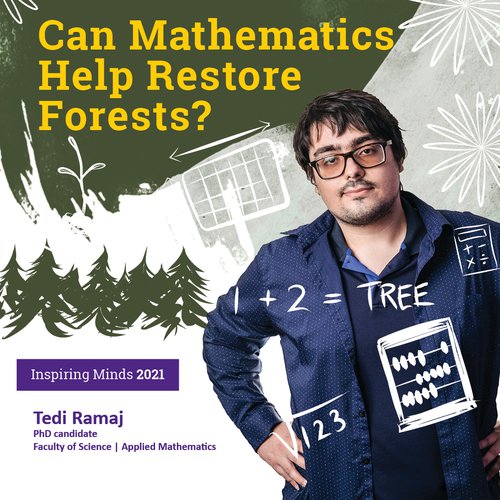 When thinking about mathematics, complicated equations, formulas, and graphs frequently come to mind. What some may find surprising is just how broad the reach of math really is. By harnessing the power of mathematical and computational tools, we can tackle problems in seemingly disparate fields such as ecology. This allows researchers to take an integrative approach to problem-solving, where ecologists and mathematicians can collaborate. For example, invasive weed species can lead to depletion of natural forests, which can trigger a cascading effect that also impacts the local wildlife that depend on the forests for survival. Various methods, like herbicide application, have been suggested and applied as possible control measures against forest depletion. By applying mathematical theory and using computers to perform simulations, we can make predictions on which control measures might be most effective in the long run without having to wait. After all, time is of the essence!

Tedi is an applied mathematics researcher with interests in mathematical biology, applied dynamical systems theory, and teaching mathematics to wide varieties of audiences. He received his bachelor's degree in mathematics, with a minor in biology, from McGill University in 2017. During his undergraduate career, he became interested in the intersection of the two disciplines, leading him to pursue his graduate studies at Western. His PhD research focuses on the application of mathematical and computational tools in the context of various biological settings. This includes ecology, epidemiology, and the dynamics of heterogeneous diseases in response to therapy. By developing mathematical models and running simulations, he hopes to gain new insights on both the biological system in question, as well as on the underlying mathematical tools. He is greatly interested in collaborating with researchers from various fields, as he strongly believes that an integrative approach can yield valuable insights to each of the individual fields.

You can connect with him via email at tramaj@uwo.ca.

View Tedi's work as it appears in the Inspiring Minds Digital Collection.