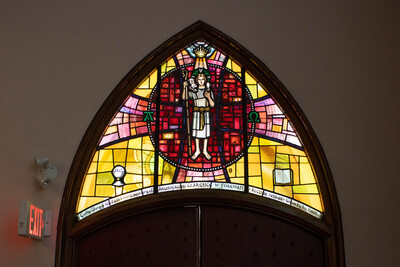 Inscription: To the Glory of God & in loving Memory of Archdeacon CLARENCE W. FOREMAN, RECTOR 1935-67. Given by his family.

In discussing the window with the church historian at St. John’s in 1983, Wallis notes: “The symbols in the window speak to us of the ministry of Archdeacon Foreman in our midst. The crown at the top represents the risen Christ who still exercises his ministry of shepherding through those faithful to him. The open Bible and the chalice and host speak to us of the ‘tools of shepherding’ so faithfully used by the Archdeacon.” (The Evangel (St. John the Evangelist), March 1983).

Foreman was canon of St. Paul’s Cathedral from 1946-1948; in 1948 he became Archdeacon of Middlesex. In 1956 he was awarded an honorary degree of Doctor of Divinity from Huron College.