The Lord is My Shepherd 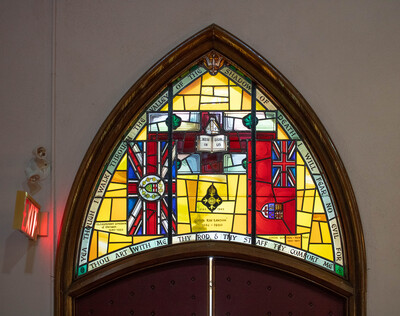 The window includes multiple heraldic references that relate to Ray Lawson's career.. These include the insignia for the Officer of the British Empire (O.B.E., awarded 1943, recognized by the O.B.E. insignia in the centre of the window), Lieutenant Governor of Ontario (1946-1952, represented by the flag of the Lt. Governor to the left) , and Consul General to New York (1953-1955, acknowledged by the flag of the Red Ensign of Canada to the right). The window also incorporates the Anglican flag of Canada recognized by a cross, mitre, book, and maple leaves. Lawson chaired several committees in 1927 at St. John's including those that enlarged the current chancel and created the Parish Hall. Lawson was president of Lawson and Jones Ltd and Chancellor of the University of King's College (Halifax) from 1948-1956. The Lawson Foundation, a charitable trust, was set up in 1956.