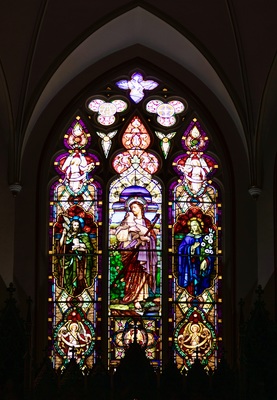 Donated by the Congregation

John, the cousin and forerunner of Jesus, is clothed in green to symbolize spring, the triumph of life over death, charity, regeneration of the soul through good deeds and hope. He holds a lamb referencing Christ as the Lamb of God, and a staff with a white banner which symbolizes Christ’s Passion.

With this window, St. John’s has a unique distinction of having “the oldest known work in London completed by the oldest established stained-glass windows in Canada, Joseph McCausland Company.”

In 1936, the central window was restored and two new panels, depicting the Blessed Virgin Mary and John the Baptist, were installed to replace two scriptural medallions which were beyond repair. The original scheme, design and colourings of the window were not altered. An additional pane of glass was installed on the outside to ensure the preservation of the window.