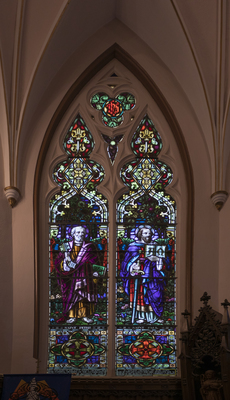 “In loving memory of Enid Mary, wife of Stuart L. Gunn, who died June 4, 1931, age 36. Erected by her husband and sons Geoffery and Kenrick”

Paul, the great Apostle to the Gentiles, and the author of the principal Epistles of the New Testament holds symbols, a sword in and an open book with Alpha and Omega on each side.

Enid Mary (Burton) Gunn was the only daughter of George and Kathryn Burton of Blundlesands, Lancashire, England. She met Stuart Lowhall Gunn in London, England while serving as a Volunteer Aid Detachment military hospital work and he was a Staff Officer at Canadian Forces Headquarters. They were married as St. James, Piccadilly, in September 1918 and moved to London, Ontario few months later. Around1922 the Gunns joined St. John’s, and she became very active in the parish. She was an accomplished musician and had been educated at conservatories in pre-war Berlin. She was also an artist and costume designer for the London Skating Club carnivals. Due to a decline in her health, Enid Gunn returned to England in August 1929 and died in June 1931. Her husband and sons returned to London, Ontario, the following August.