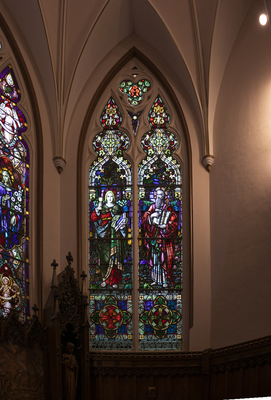 Luke, the author of the Gospel of St. Luke and the Acts of the Apostles, carries the book of his Gospel in one hand. As the patron saint of artists and physicians, he holds the staff of Aesculapius, the Greek God of Healing.

The Blackburn family has a long and dedicated relationship with St. John’s church, to the London Free Press, and to the city itself. Josiah Blackburn launched a daily newspaper on May 15, 1855. In 1900, his son, Arthur Stephen became secretary-treasurer of the business and then president following his brother Walter Josiah’s death in 1920. Arther Stephen married Etta Irene Henderson of Wardsville married in 1902. Etta was active in a Red Cross committee that set up a clothing supply depot for civic relied in London circa 1918. Their son, Walter Juxon continued the newspaper as the editor for many years and his daughter, Martha Blackburn-Hughes, ran the Blackburn Communications Group until her death in 1992.

This memorial window was unveiled on February 28, 1937.