Faith and St. John (the Evangelist) 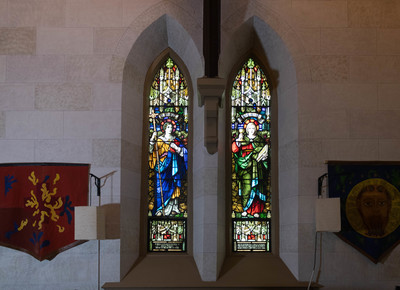 North transept arm – west wall; To the Glory of God and in Loving Memory of/Rebecca McCracken/Erected by Her Brother and Sister (l1); Erected September 1936, to the Glory of God and to/ Mark Twenty-Five Years of Most Devoted Service on/ the part of William Joseph Smith as Vestry Clerk (l2); scrolls: Faith (l1) and St. John (l2); The association with St. John the Evangelist and Faith correlate to John’s undeniable faith in Christ and God. This is affirmed in the right light that depicts John holding a chalice (although not rendered here, sometimes the chalice has a serpent emerging or wrapped around the object). According to the so-called Acts of John (a series stories about John that began to appear in written from by the Second century CE), to prove his faith, John had to drink a chalice of poison. Because of his faith, God rendered the poison harmless. Like many Christian icons, the Chalice is a reference to the installation of the Eucharist at the Last Supper, and also a reference to Matthew 20:23 when Christ instructs the sons of Zebedee, James and John, to “You will indeed drink My cup, and be baptized with the baptism that I am baptized with…”