The Light of the World; Woman with Spinning Wheel 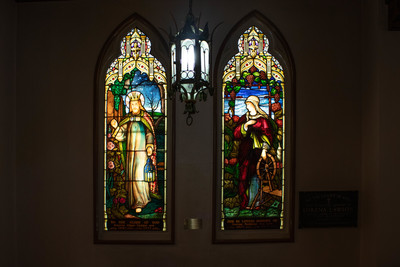 Donated by the Family.

The left window was inspired by William Holman Hunt’s The Light of the World (1854) and is an allegory of Christ with a glowing lantern knocking on the door of the human heart (Rev. 3, 20). The right window depicts a woman spinning, which is traditionally associated with women’s work and activity. This is a memorial for Mrs. Lawson, who was one of the early leaders of the St. John’s Women’s Auxiliary of the Missionary Society of the Anglican Church in Canada. During WWI, she with Mrs. Green produced hospital shirts for the Women’s Guild. Frank Lawson was involved with the Lawson Company (printing) and was one of the earliest members of the London and Middlesex Historical Society (1904 - 1908). Mr. And Mrs. Lawson were the parents of Hon. Ray Lawson, Lieutenant Governor of Ontario (1946 – 52) (see The Lord is Shepherd window).