Presentation in the Temple 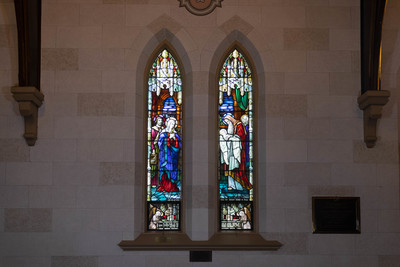 Nave – north wall, window 1 of 3, east to west; To the Glory of God/And in Loving Memory of/James Cummings Duffield and/Agnes Munro His Wife./Erected by/Their Children (across both windows); “Lord Now Lettest (l1) Thou Thy Servant Depart in Peace.”(l2): Luke 2:29; The two lights depict one of few episodes from the Christ’s childhood and is take from Luke 2: 22-40. As was costume, Mary and Joseph traveled to the Temple in Jerusalem for “purification” after childbirth and the Judaic tradition of the “redemption of the first-born son.” To pay for the rights, Mary and Joseph brought two turtledoves (or pigeons) because they were poor (Leviticus 12:8). The offering had to be made 40 days after the child’s birth (Leviticus 12:1-4). Upon entering the temple, Simeon who, according to Luke’s Gospel, stated he would not die until he sees the savior. The story unfolds across both lights: the left depicts Joseph, who carries two-caged doves and Mary. The right window depicts Simeon holding the Christ child and behind him stands Anna, who is believed to prophesize Christs coming.