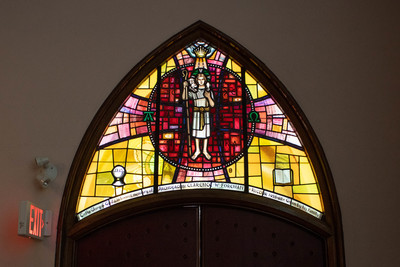 “Given by his family”

The symbols in the window speak of the ministry of Archdeacon Foreman. The crown at the top represents Christ who exercises the history of shepherding through those faithful to him. The open Bible, the chalice, and the host represent the “tools of shepherding.”

Foreman was born in Granton, Ontario, on September 5, 1893. He graduated from Huron College in 1915 and made a deacon in 1916 then a priest in 1917. He was appointed curate at the cathedral. He enlisted in the chaplaincy service of the Canadian Army and served overseas during the war. Upon returning to London, he resumed his curacy until he was appointed rector of the Church of the Holy Saviour in Waterloo in 1921. He returned to London in 1935 where he led St. John’s for thirty-three years. He was also active in the affairs of the Diocese of Huron and served on several committees.