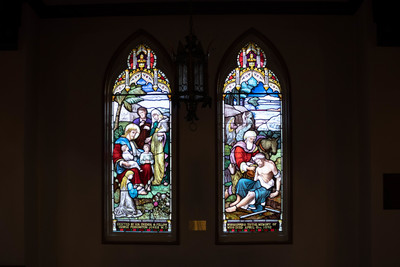 “To the Memory of George Pennington Jones M.D., who died April 8, 1892.
Erected by his Friends & Fellow Worshippers.”

The words of Jesus “Suffer the little children and forbid them not to come unto me: for of such is the Kingdom of Heaven" (May 10:14) are most appropriate for the beloved doctor, George Pennington Jones (1845 or 1847 - 1892) who cared for many children during his medical career, 1870-1892. The second light also testifies to his caring and compassion.

Dr. Jones was from an English family whose home was in London Township. For a time he taught in London. He attended McGill University, Trinity College, and Harvard University. He was the chair of Sanitary Science (1883 - 1887) and of Obstetrics and Disease of Children (1887 - 1982) at Western. Dr. Jones was a staff member of London General Hospital.

Dr. Jones was an organist at St. James Westminster, at the Chapter House’s chapel, and at St. John’s. He directed a mixed adult choir and boy’s choir at St. John’s.