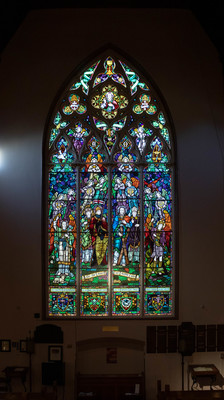 The window commemorates those who served and gave their lives in WWI and WWII and includes one of the earliest Canadian memorials to honour women’s service. At the forefront are the four patron saints of the British Isles: St. Patrick and St. George on the left and St. Andrew and St. David on the right. The two outer panels include representations of war and peace as the archangel Gabriel, with lilies and a lamb, points upwards to a scroll inscribed “On earth peace, goodwill towards men” and St. Michael, holding a spear, has his foot on the defeated Dragon. Surrounding the group are angels bearing symbols of Christ’s Passion and carrying the Cross and the Crown. In the tracery at the top of the window, the figure of Christ with his right hand raised appears in a medallion surrounded by emblems, the Chalice (faith), the Anchor (hope), and the Cross (sacrifice), and the monogram IHS (Jesus). The bottom panels include the crests of the Navy, the Army and the Air Force, and the Eagle, emblem of St. John the Evangelist.

In 1945, a War Memorial Committee was set up to consider several proposals. The Women’s Guild suggested a large West Window and subscribed $1500 towards its cost. On January 9th, 1949, the War Memorial Window was unveiled on the west wall by Major E.S. Fisher, which was followed by the reading of the names of those served and in memory of those who had paid the supreme sacrifice. Later, floodlights were installed in memory of Helen Roadhouse (1910-1979) by her husband Joyce Roadhouse to make the window visible from the street at night.