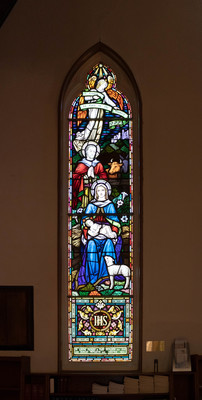 The artist depicts the Holy Family with an angel above Joseph and a lamb at Mary’s feet. Mary is dressed in blue. A scroll reads "Glory to God in the highest." Like in the matching Meikle's Whyte Window, a sacred monogram is included in the design. IHS, the first three letters of Jesus’ name in Greek is near the bottom of the window. The theme and the colours of glass are complementary to those of the Whyte window. Together they celebrate the beginning and end of Christ's earthly life.

The window recalls an early London family. Duncan McMartin, who lived at 205 Sydenham Street, worked at the Post Office. The McMartin family had an interesting London connection. His father, Peter McMartin moved from Cornwall in 1839. After working as a dry goods clerk, he ran the City Hotel (later the Belvedere Hotel and Talbot Inn) until 1875 when his other sons, James and John, took over proprietors. Peter’s other children included: Robert, George, Edward, Anges (a china painter), Clara, Eta, and Lizza.